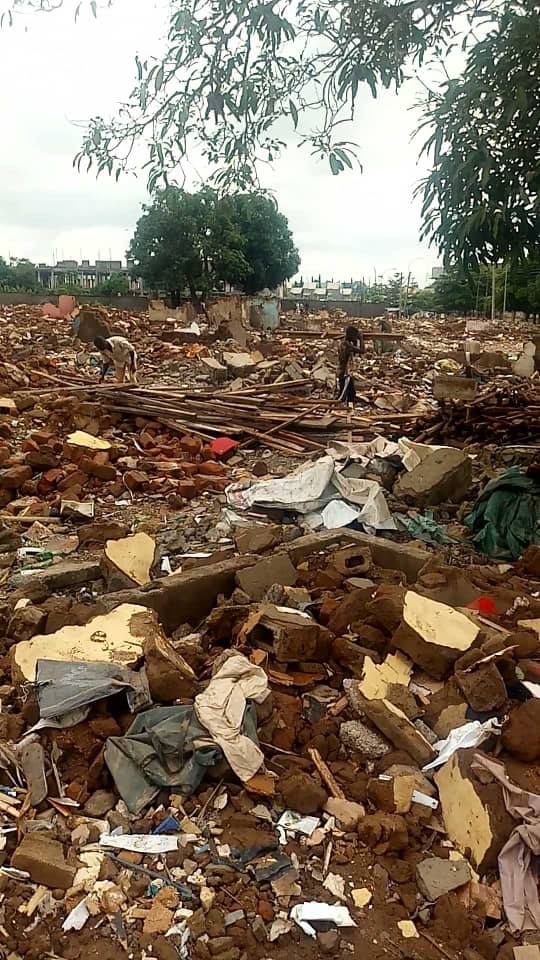 Miracle Ezima, a petty trader with two shops in Apo Akpmajenya, Abuja was fast asleep on Saturday night when the staff of the Federal Capital Territory Administration (FCTA) came calling.

From deep sleep, she heard her younger sister screaming  “demolition! demolition!”  According to her, the whole thing was just like a drama.

“By the time I regained my consciousness from sleep, the demolition people were already coming closer to my shops. My husband quickly ran out to salvage the things he could salvage from our second shop. He was tear-gassed and beaten up by security persons. It was just a few things he was able to pick before the whole shop was pulled down by a bulldozer.

“As I was trying to save the second shop and also bring my children to safety, the second shop was also pulled down leaving me with almost nothing to pick up from my belongings.”

Ezima does not have a problem with the demolition but faulted the manner at which it was carried out. She said the government should have allowed her to pick up her belongings before going on with the process.

When The ICIR visited the demolition scene on Monday morning, she was still trying to see if she could still find some of her valuables. She and her children are currently squatting with her sister resident nearby. 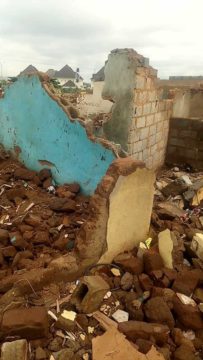 Musa is a native of Taraba State. He moved into Abuja in 2012 and settled at Apo. He and his family trade in herbicides in a small shop in Apo. Just like Ezima, he also woke up to the rude shock of the demolition of his shop.

“Dey scatter everything,” he said in pidgin English. “As I dey try make I rescue my family put for safe place, dey break my shop and before I go return all the chemical wie I dey sell don go. I think say people wie dey around carry some of them run away,” he said.

He told The ICIR that he doesn’t know where to start from as he does not even have the money to travel back to Taraba, his state.

Another victim is Agapo Ezugame, an indigene of Enugu State, whose wife is a fashion designer. He said his wife lost everything except her sewing machine that he fought very hard to pull out from the ruins.

Speaking in pidgin, he said; “These people den come 3 in the morning with police. Everywhere was filled with smoke from teargas. As I dey try make I carry the machine wie my wife dey use sow, dem beat me. I fall for ground. I just struggle carry the machine.”

Ezugame was also livid with anger about the way the demolition was carried out. He had just renewed his rent in the demolished community.  He admitted that they were notified in January but he thought the authority will give them more time for resettlement.

He appealed to the Federal Capital Territory Administration to extend a helping hand to some of them who lost almost everything for them to restart a new life.

“Abeg, I dey beg the government make den help us. Abeg,” he said.

All the people that spoke to The ICIR have the same experience to share. The only exception is John and his elder sisters who are indigene of Akpmajenya. While John’s elder sisters were denying of not being compensated and not being informed earlier by the FCT administration of any attempt of demolition, John admitted that the community was informed but it is not in January as claimed by the Muktar Galadima, the FCT Director, Department of Development Control.

Galadima had told newsmen shortly after the demolition that the demolished houses were marked for demolition since January.

According to him,  the FCT Administration has informed the owners and occupants of the demolished houses the need to vacate the area, which falls on one of the roads interchanging and linking Oladipo Diya and the Outer Southern Expressway (OSEX).

John said he got wind of the demolition during the COVID-19 outbreak. He also admitted that his late father was given a room at the new Apo resettlement in 2009, but insisted that they were informed to leave at the time nobody could find a place to go because of lockdown.

“It was during the coronavirus lockdown that they came to mark the houses. That’s why we could not move out immediately, ” he told The ICIR.

His stories are however contradictory. In one breath, he said he got a parcel of land from the government as compensation, but he has not developed it, and that is why he could not immediately move away with his family. Then he said, he got the notification of demolition from the government late.

“Yes, I got a parcel of land from the government but I have not developed it. Abi they want me to sell it or what?” He asked.

The ICIR‘s earlier report on the demolition noted how Nasiru Suleiman, the FCT Deputy Director, Department of Resettlement and Compensation, told newsmen that no fewer than 131 houses and 169 plots were given to members of the affected community as compensation.

Suleiman added that some of the occupants have moved to the Apo resettlement scheme provided by the FCT Administration.

He also said that the FCT Administration had provided a plot of land for the Chief’s house, comprehensive development, and commercial plots.

The Deputy Director, however, noted that a few of those compensated were yet to move to the resettlement area

However,  Baba Shehu Lawan, the FCT Director, Environmental Protection Board noted that the demolished area was generating environmental concerns for the FCT.

“The village is now occupied by commercial people who are mainly traders and they generate a lot of waste and those wastes are deposited even on the road,” he said.

He added that Akpmajenya village also constituted serious traffic gridlock on that axis due to its location at a junction of the Oladipo Diya road and Apo Mechanic Village road.

The Director of FCT Department of Security Services, Adamu Gwary, in his interview with NAN said the village also serves as a criminal hideout, where most of the property stolen in Abuja, particularly cars were taken for sale.

Attempts to reach the FCT administration to make comments were unsuccessful as calls put across to the Sani Abubakar, the Special Assistant to the Minister of FCT, were not picked nor did he respond to text messages sent to him.