THE Nelson Mandela Freedom Park in Osogbo, the Osun State, once held promise for Osun residents, but that magic was short-lived. JOSEPH OLAOLUWA reports about the decay of the park and the secrecy surrounding the funding.

The administration of Ogbeni Rauf Aregbesola in Osun State designed the Nelson Mandela Freedom Park in Osogbo, the state capital, from what used to be a plank market and garage.

The park was designed to have a  garden at the centre with adequate sitting corners, planted trees, and flowers. Strategically placed were terracotta heads of past governors and administrators of the state. Close by those terracotta heads was a fountain protected by perimeter fencing.

The park is situated by the side of the railway line, while a gantry-like ladder was constructed over the line to help residents enjoy the view.

One side of the park had a well-cultured garden, relaxation tents and bouncy castles, while the other side had sitting corners and a fountain. The project had two gantries at the entry and close to the road.

Police shoot journalist, one other in Osogbo

The Nelson Mandela Freedom Park was used as the venue for one of the activities to flag off the end of Aregbesola’s eight years as governor. The Vice President, Yemi Osinbajo, was in attendance.

However, the attraction associated with this project was short-lived due to what residents described as its abandonment and neglect.

On February 5, 2022, The ICIR reporter paid a visit to the park. It revealed the tourism centre was unkempt and uncatered for. There was no gateman, security man or any other official at the entrance.

However, several minutes after the reporter entered the park, an attendant appeared and asked for a N300 access fee, even though N500 was printed on the ticket, which interestingly was for the previous year’s Christmas carnival.

The attendant, who introduced himself as Brand, says he manages the facility on behalf of Bristol Family Park, the concessionaire. He told The ICIR that the construction of the Olaiya overhead bridge close by the park was responsible for the low turnout of visitors.

“I am the one that manages this place. People are few today because of this overhead bridge. We are doing a re-opening when the bridge is completed,” Brand said while explaining the desolation at the park.

Dusty chairs, stagnant water in the fountain, no food

A cursory look outside the park walls showed its surroundings littered with waste and weeds creeping over the walls.

On entrance into the park, The ICIR reporter observed dusty chairs at the park, which showed how long it was put to use. Even the bouncing castle was deflated.  The fountain was not functional. It was replaced by a pool of dirty-smelling water.

An effort to get a meal at the place was momentarily futile.

The caterer had to be contacted on the phone to prepare a pepper soup meal for the reporter, who had requested it as he sought to check the readiness and efficiency of the park’s kitchen. From the finding, the centre is not doing much business there.

Also observed was that most of the stalls erected at the park were not functional; another sign of business was on the low side.

The lights on the staircase at the gantry were not functional. Further down the gantry was another project, a big event hall now neglected after its construction.

Goats have taken over the bust sculptures of the state’s past military and civilian leaders erected in the park. The perimeter fencing had already fallen off.

To Funke Kamarudeen, a resident of the area, the state government wasted so much money on the project, as she believed that their street could have been converted into an access road that could serve Old Garage and Olaiya Junction, linking them together.

Kamarudeen said, “Its previous state is better than this structure that is currently constructed. Before now, shops were constructed there, but, now, armed robbers can easily start living among residents here. It is not good enough this way.

“If they can find a solution to the abandoned park, they should construct it like a warehouse so that we can all benefit from it. It is not good that it is abandoned, they did not think well when constructing the park. It could have been better converted into a road where tolls can be collected.”

The menace of unfinished projects is one that has cost Nigeria very dearly. Last year, the Nigerian Institute of Quantity Surveyors, (NIQS) revealed that 56,000 abandoned projects existed in Nigeria, estimated at the cost of N12 trillion. They blamed the phenomenon on corruption, compromised contracts, and the decision of new regimes to abandon contracts awarded by their predecessors. 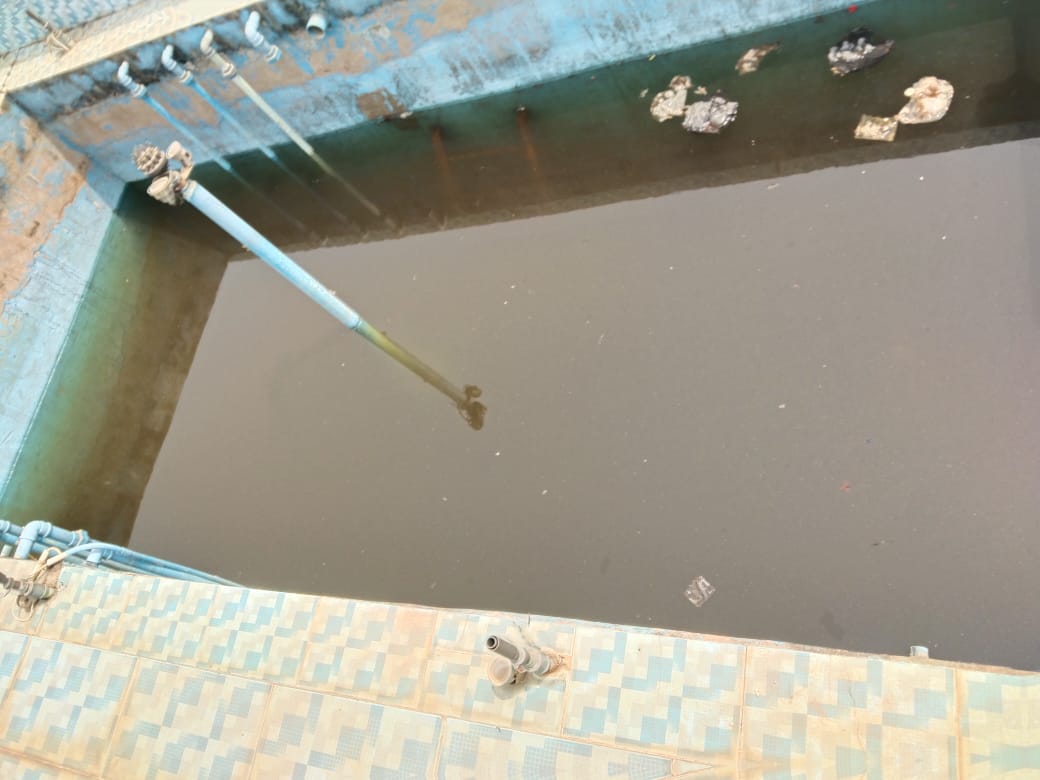 Aregbesola built 11 ‘mega’ high schools while employing about 3,230 teachers in 2013 in public elementary and middle schools to aid his educational transformation idea for the state.

These initiatives were said to have gulped N11 billion from combined sources, including the Osun treasury, bond issuance and capital receipts from the federal government.

However, some of the projects, including the Nelson Mandela Freedom Park, have turned out to be white elephants.

Olayokun Idowu, who served as the community leader for the Togunle community, believes the government could have gotten better mileage from roads or stalls instead of a park.

Idowu said, “The Nigeria Railway Corporation had the land before the park was constructed. I am unsure if the land was leased, but both bodies had an agreement to create the park. Before then, there were some houses there and a few restaurants up to three that were here. Some churches were also situated here.

“The government destroyed the initial building on the site. Also, along that time, there was a sawmill situated on the land and it had been there for a long time. My mother was the first person to build a property in Togunle, as we have been here for over 40 years. The sawmill developed some areas and began to use them to work. But when the government came, it declared it wanted to use it for Freedom Park.

“We know the government is looking for a way to increase the internal revenue, but if you look at the park, you can see it was not well done. It is as if money was just wasted here. But there are other things the government can do to make the park viable. If they truly make this place a market, and this road in front of us leads to Ayetoro, it would have helped. Alternatively, they could use this road here as an alternative route, but everything has been blocked.”

“If the people of Ayetoro take shops here, it will be more viable for the government on a yearly basis. The government has ignored our advice when there are many things we can do to turn this place around. Millions of naira have been sunk into this place.”

Death of commerce in the community

Idowu said, “The time when the hotels were here, business was booming. Now that they are doing Freedom Park, it has become a barren land. There is a woman that was selling food (referring to Funke Kamarudeen, who our reporter had met earlier), when many people were living here, she never hawked her food for once. After they sent them away and demolished the initial structures for the park, she began to hawk her food in garages.

“It is the same sad story for many others. The community never really benefited much from the location of the park here. We told the Ministry of Commerce that nobody can maintain the grasses growing in the park. But if they can turn it to a supermarket and open the road, things will do well.”

Idowu explained that aside from economic loss, they now experience flooding.

Idowu said, “We have been in this community for over 40 years. There is water behind this place, and since they did that drainage every year, we have not had peace. If they did not want it to disturb us, they should have dredged it so the water could flow.”

The case of flooding was confirmed by Kamarudeen, the food vendor who urged the government to find a situation to their predicament, “We suffer flooding whenever it rains,” she said.

Another resident, Nike Gidadu, attributed the abandonment of the park to low finances of the government and “poverty” in economic activities.

“This is how the whole state looks like. From top to bottom, things are slow. It is not only Osun State. People still come around the park, but it is just based on their financial capacity. This is not how it was before.”

The immediate past Osun State Commissioner for Commerce, Industry and Cooperatives, Ismail Adekunle Jayeoba-Alagbada, refused to explain why the park was neglected and abandoned.

When The ICIR contacted him, he said, “I am busy now, I am in a programme. Go and talk to the Commissioner for Commerce. I am no longer in office. I have no comment for now.”

Similarly, the incumbent Commissioner for Commerce, Industry and Cooperative, a doctor, Olanipekun Henry Olabode, refused to speak to the reporter on the project.

There have been media reports detailing some other abandoned projects in Osun State. An investigation by The ICIR in 2018 revealed that at least five different waste recycling machines were lying dilapidated and unused. One of them at the Osogbo landfill along Iwo road cost N15 million but has been grossly underutilised.

In 2019, the Minister of Works, Power and Housing, Babatunde Fashola, through a representative – Federal Controller of Works in Osun State, Engineer Ezekiah Kehinde –  said seven federal government projects totalling N18.186 billion were abandoned in the state.

He listed the Gbongan-Iwo road, Ilesha-Osogbo road, the Illie bridge, Ile-Ife-Ifewara road and Mayfair-Lagere road among abandoned projects with attendant socio-economic implications for the affected communities.

Checks by The ICIR show that the park was not captured either in the state or federal government’s procurement site.

Efforts to get the State Government’s expenditure on the project proved futile even after a Freedom of Information request was made.

The first letter attached above was sent on July 19, 2022, and was acknowledged by the state government.

Another reminder was also sent. The state government failed to respond to the letter, despite acknowledging it on August on the 9th of August 2022.

Chat us on WhatsApp
Advertisement
Previous articleZulum visits Bama hospital at night, orders employment of doctors, nurses from community
Next article[ANALYSIS] East African footballers are a rarity on the global stage: we analysed why