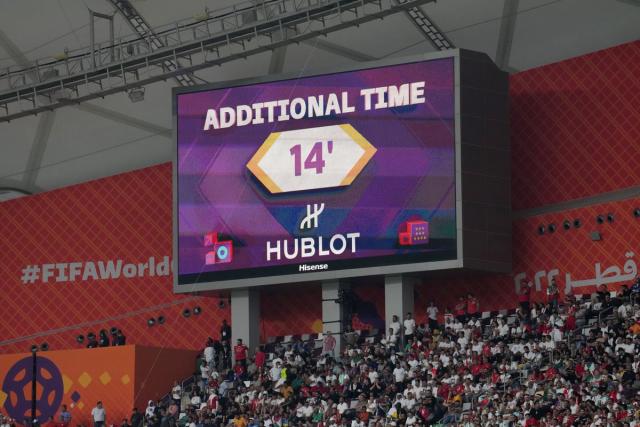 LONG stoppage times are one of the consistent features of this year’s FIFA World Cup.

Furthermore, all the games in the tournament have run for approximately 100 minutes.

The chairman of FIFA’s referee committee, Pierluigi Collina, confirmed last week that fourth officials would deliberately keep track of all time lost during each game. The purpose is to curb intentional time-wasting and compensate for time lost to video assistant referee (VAR) reviews. Collina recalled that this strategy was implemented in Russia, with ‘six, seven, or eight minutes’ added per game.

Arsene Wenger, FIFA’s chief of global development, has been one of the proponents of this change. In 2009, while he was Arsenal’s manager, he demanded clarity about how referees calculated stoppage time.

“We all sit on the bench at the end of a game and if there have been four substitutions, plus two minutes of injury time, plus two minutes for another player going down, how much does that make? Nobody knows. I’d like it if we were given strict guidelines on how they calculate the time remaining.”

Injuries have been a key reason for the long stoppages

Injuries and the time taken to treat them now considered when setting stoppage time. Thus far, several players have been subject to lengthy treatments on the pitch. In the match between England and Iran, the game was paused for around 10 minutes after goalkeeper, Alireza Beinranvand, went down with a concussion. Afterwards, the referee awarded 14 minutes of extra time.

In an earlier report, The ICIR highlighted injury and workload cautions from FIFPRO, the global trade union for professional footballers. The new circumstances around the additional minutes have added another dimension to those concerns. Players now have to contend with the longer games and increased physical workload towards the end of games.

Nevertheless, the longer games have drawn some positive responses from echelons of the footballing community.

Former Liverpool midfielder, Jamie Carragher, agreed with the decision on Twitter: “Enjoying the amount of time that is being added on by the officials at the Qatar World Cup 2022. There is too much time wasting in football!”

It remains to be seen how these adjustments will play out in the knockout stages.

Chat us on WhatsApp
Advertisement
Previous articleWikkiTimes to hold colloquium on democratic sustainability
Next article2023: Why I will go on exile if Tinubu wins – Bode George