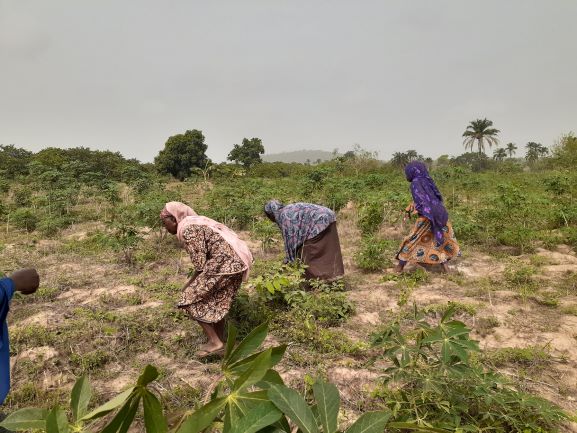 WOMEN farmers in Oke-Ogun, Oyo State, have alleged that support meant for them are being diverted to non-farmers.

They say their travails occasioned by insecurity, climate change, and obsolete farm implements are worsened by the COVID-19 pandemic despite various programmes and interventions by the government at both state and federal levels.

But the Special Adviser to Governor Seyi Makinde of Oyo State on Agribusiness Debo Akande said the state had provided palliatives for more than 9,000 farmers in the state.

The special adviser said the government also initiated a scheme to mitigate the effects of the pandemic on smallholder farmers.

“In addition to that, Oyo State has also subscribed to a project called N-CARES, which has to do with the mitigation of the impact of COVID-19 on smallholder farmers that would be supporting more than 6,000 farmers this year, including youths,” Akande added.

During the COVID-19 pandemic, the Central Bank of Nigeria (CBN) rolled out interventions to cushion the effects of the pandemic on micro, small, medium and large scale businesses in Nigeria.

The interventions included a one-year extension of the moratorium on principal repayments for the bank’s intervention facilities,  regulatory forbearance granted to banks to restructure loans given to severely affected sectors by the pandemic.

Other measures were: Creation of a N100 billion credit facility for affected households, including for micro, small and medium enterprises (MSMEs) through NIRSAL Microfinance Bank.

A visit to some smallholder women farmers in the Oke-Ogun region of the state did not show any result of these incentives as many complained of neglect in the scheme.

Even in Iseyin, Iwajowa, Saki East, Irepodun and Olorunsogo local government areas of the region, women farmers said the palliatives meant for farmers were given to non-farmers.

But Akande insisted the state budget for agriculture for 2021 was the third largest of all the overall budget.

Governor Makinde also said his administration would remain determined to utilise agriculture to drive its economy. It had allocated 4.43 per cent of the total budget proposal to the agricultural sector.

For the benefit of hindsight, in the 2019 budget, there was a provision for the purchase of agricultural equipment worth N50 million and other equipment at N10 million. Still, such provisions were not made in the 2020 budget in Oyo State Ministry of Agriculture.

Also, the production of farm seedlings was put at N350 million in 2019, but no appropriation was made in 2020.

In 2020 budget estimates under the Agribusiness Development Agency, N48.5 million was slated for special projects and assignment, while N130 million was budgeted for educational programmes and N3.3 billion for empowerment in the agric scheme. About N68 million was for farm development.

Findings show that the state’s average provision for the agriculture sector from 2015 to 2019 has hovered around four per cent of the total budget, according to Centre for Social Justice data.

The Small Scale Farmers Organisation in Nigeria argues that budgetary provisions for agriculture are too small and that this hinders productivity in the agricultural sector and affects the income of smallholder farmers, especially women.

For Latifat Muritala, a smallholder farmer in Olorunsogo Local Government Area of Oyo State,  her major complaints are funds and farming inputs.

“We do not have funds for farming, and we lack the implements for doing farming work in the modern-day. Various programmes rolled out by either the state or federal government didn’t get to us at all,” she said.

Muritala, a middle-aged woman who works with other nine smallholder female farmers, also complained about huge loss on her investments.

She said: “We have been incurring losses in recent years due to low yield.

“My colleagues and I spent more than N150,000 on farming, and we did not realise up to 50 per cent of the production cost.

“We pray that this planting season will be better than the past.

“We need rain for farming to go well this year.

“As it stands now, rain ought to have fallen so that cultivation would go well, but we have yet to have rainfall, and that was the cause of devastation to crops during the planting season in 2020.”

Similarly, Jemila Yunisa, another smallholder farmer from Irepodun Local Government Area of the state, said she and many of her colleagues did not receive anything from the state government and accused the state government of diverting support to people who had nothing to do with farming.

Yunisa said: “We didn’t receive any support or palliatives from the government to the farmers. 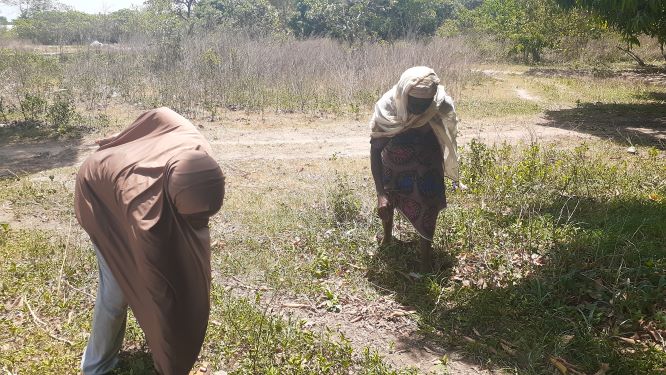 “They use Facebook, WhatsApp and other social media technologies to pose as the real farmers, and they get the benefit.

“We take loans from cooperatives and banks, and we find it difficult to repay our loan because of the challenges we are faced with.

“Lack of adequate rainfall is the number one challenge we were faced with in 2020; we are equally faced with the issue of cattle devastating our farmlands.”

Musilatu Ashiru, a 55-year-old smallholder farmer in Saki East Local Government Area, corroborated this, saying: “We only hear of the various government interventions, but we have never received any.

“I was part of the Anchor Borrowers Scheme, but in the past, we did not benefit from the scheme, and when we wanted to opt out of the scheme, they appealed to us and promised that there would be a change and the benefits would go round, but till now we are yet to receive any support or benefit.

“We do hear that the government gives out seeds, fertilisers and other support, but we have never benefited from these till now.

“Those who are not into farming business receive these support and gestures; they, in turn, sell whatever they were given to farmers.

“Those of us in dire need of this support don’t receive them.”

Alimotu Sulaiman, a smallholder farmer in Iseyin Local Government Area, also said: “We have yet to receive any benefit from the government at both state and federal level. 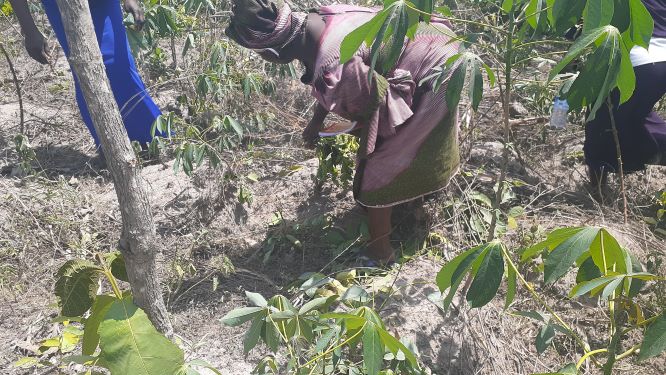 “We are doing farming business with the little money we have.

“The microfinance banks that promised us loans have kept failing us.

“We filled out forms, we exhausted the passport photograph we took, and they kept saying next month till rainfall stopped.

“We know of the Anchor Borrowers Scheme, but we have never benefited from it.

“We are part of the All Farmers Association of Nigeria.

“In fact, I hold a women leader position there, but we have yet to get any benefit from the government; we keep hearing promises.”

Sulaiman, a 60-year-old smallholder farmer, recounted how she sent all her children to get formal education with the proceeds from her investment in agriculture.

She said: “We experienced total loss on the maize we planted last season. The same for yam and termites devastated our cassava plantations. It was providence that made us have some yields; we experienced losses due to lack of rainfall.

Taiwo Okunlola, a 48-year-old smallholder farmer in Iwajowa Local Government Area, said she and other farmers had to employ other means of funding their agriculture business when help failed to come from the government.

Okunlola said: “We have yet to receive any support from the government at all levels. We make contributions or take loans to fund our farming business. We buy fertilisers, chemical and seeds we use for our cultivation. We buy fertiliser at N8,000, or we buy at N9,000 if we need it in a hurry. We borrow tractors to do tilling and clear our land in preparation for planting.”

Almost all the smallholder women farmers interviewed said they lost a significant part of their investments, sometimes up to about 80 per cent, in the 2020 farming season.

These women feared that the ripple effects of their losses might affect food production in the 2021 planting season as they did not have resources.

Beyond the issue of palliatives are climate change and insecurity starring smallholder women farmers in the face in the region.

Though they said they had received various training on irrigation farming and other modern farming practices, they cannot practise them due to paucity of funds.

They appealed to the government to go through their unions in identifying and supporting real farmers.

Ashiru, the leader of SWOFON in Saki East Local Government Area, said the government could identify true farmers by going through the farmers association to know the true farmers such as AFAN.

He said: “We urge our government in all that they want to do for farmers that they should include AFAN in their plans.

“AFAN should have certain benefits it gets from each local government per time.

“If it gets to AFAN, then women farmers under SWOFON would get their due share.”

Aside from the lack of funds, other challenges facing smallholder women-farmers who constitute 60 per cent of the food production chain in Nigeria lack modern and women-friendly farming implements.

Given this, SWOFON, which has been at the vanguard of empowering smallholder women farmers in its charter of demand, advocates zero interest on loans for female farmers and supply of gender-friendly equipment, among others.

Part of the demands in the SWOFON charter states that there should be a review of customary land laws for small-scale women farmers to inherit the land for sustainability.

However, there have been many partnerships with Oyo State Government to boost the agricultural sector: one of them was by German BMZ co-funded by the European Union, Nigeria Competitiveness Project, a four year €10 million project commissioned in 2020 with a focus on processing of tomatoes, pepper, chilli and ginger, among others.

In one of such collaborations in February 2020, the African Development Bank selected Oyo State as one of the two Strategic Agro-processing Industrial Zones and the hub for industrial cassava, poultry, fisheries, crop and livestock production.

The discussion is ongoing and will be finalised for implementation within the year, the government of Oyo State said.

Observers, therefore, note that with all these and more on the pipeline, there is hope for smallholder women farmers.

The state government has said it will work with medium and large scale enterprising to boost the state’s economy, and many stakeholders expect it to fulfil this promise.

. Emiola works with the News Agency of Nigeria.

This report was made possible with support from the International Budget Partnership and International Centre for Investigative Reporting.

Ibarapa crisis in the face of media abundance