Data reports
By Arinze NWAFOR and   Damilola OJETUNDE On May 29, 2021

IN 2015, the President promised to revamp the economy, curb corruption and improve security in Nigeria.

He reiterated the promises, when he sought reelection in 2019.

He specifically highlighted security, especially dealing with the menace of the terrorist organisation, Boko Haram, that had been a torment to the country.

He also promised to improve the economy through a number of schemes and policies.

In addition, he pledged to fight corruption, with emphasis on checking graft at the Nigerian National Petroleum Corporation (NNPC), and the oil sector.

The promise to crush Boko Haram appeared to be successful in the earlier years, but has since resurfaced.

Today, Nigeria continued to face newer threats, including the herders-farmers’ clashes and  kidnappings by bandits.

In 2021, the insecurity spread to the  southern Nigeria that was previously peaceful, now there is an increase in attacks on security formations, especially the assets of the Nigerian Police Force.

Nigeria has seen two recessions in the Buhari administration; one in 2016 and another in 2020. 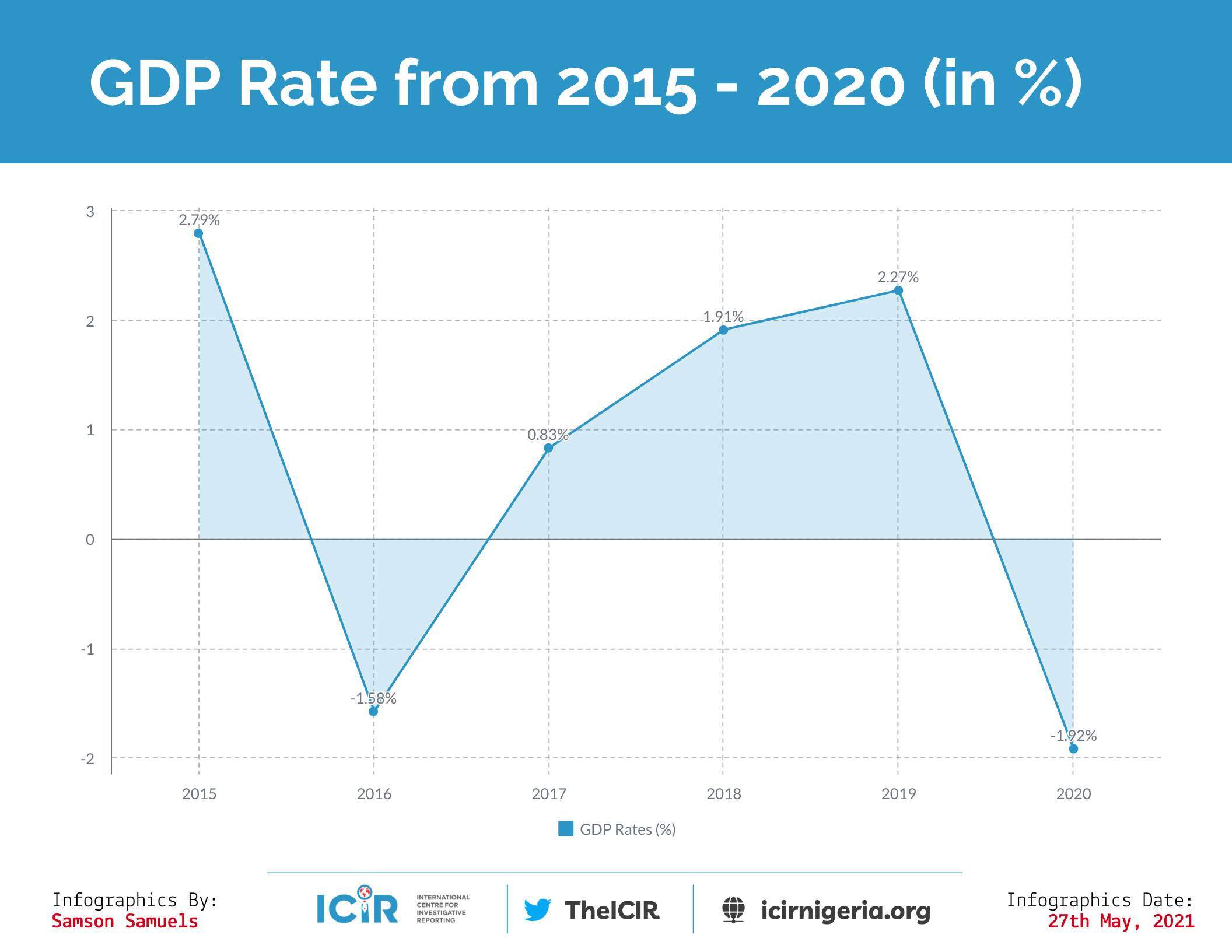 Borrowings  during Buhari administration have soared with a total debt stock rising  from N12.6 trillion to N32.9 trillion, an increase of 161.16 percent from December 2015 to December 2020, according to Debt Management Office (DMO).

At the current national debt stock of over N32 .92 trillion, further analysis by The ICIR shows that the over 200 million population currently owes about N156,203 ($410) per inhabitant in terms of per capita debt.

This is where 41 percent of its population (86.8 million) cannot afford two dollars  (N762) in a day because they live below that threshold, according to the World Poverty Clock. 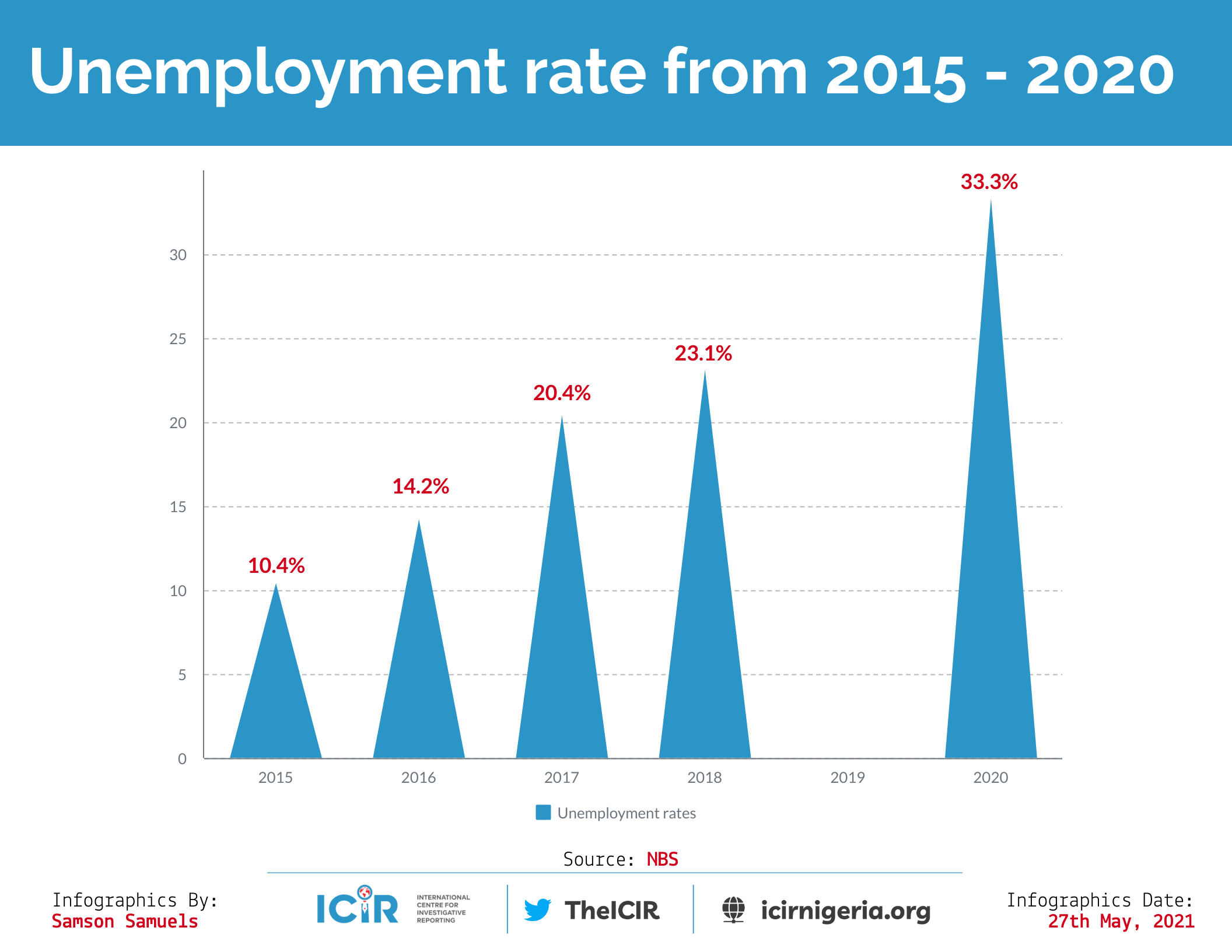 The National Bureau of Statistics in its most recent labour force statistics pegged Nigerians unemployed rate at 33 .3 percent

The inflation rate had dropped from 18.17 percent to 18.12 percent in the past month, but the Naira still suffers. Analysts have attributed the increase in prices of goods and commodities to the closure of land borders between August 2019 and October 2020 and also coupled with the effect of the COVID-19 pandemic that shut down the world’s economy.

“The closure of land borders in the country in August 2019 was a major driving force for the upward trend of the inflation rates of the country,” says NBS.

The exchange rate had risen from N197 to one US dollar in 2015 to N381 respectively in 2020. A worsening of the currency’s continued devaluation from 9.55 percent to 15.75 percent, data from the Central Bank of Nigeria (CBN) reveals. 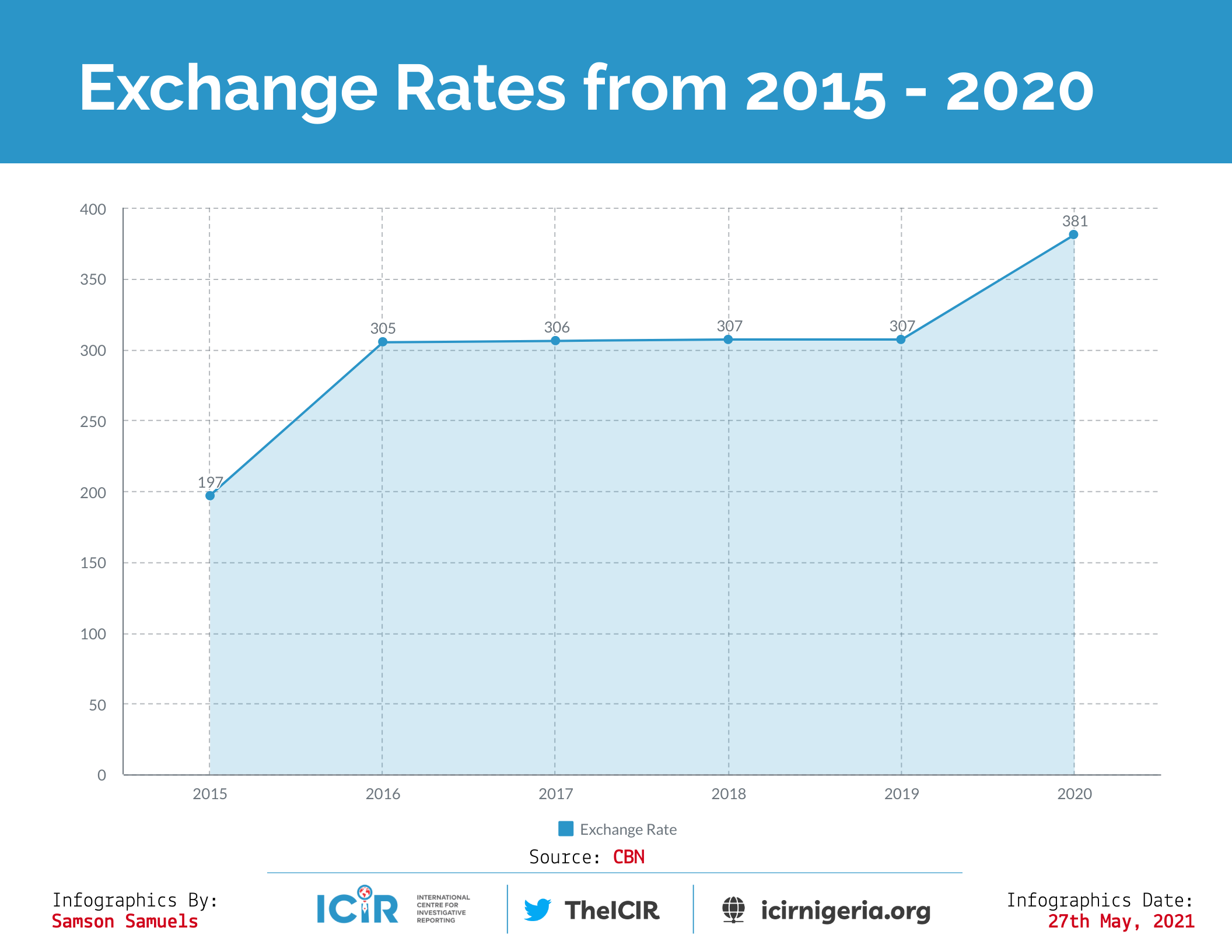 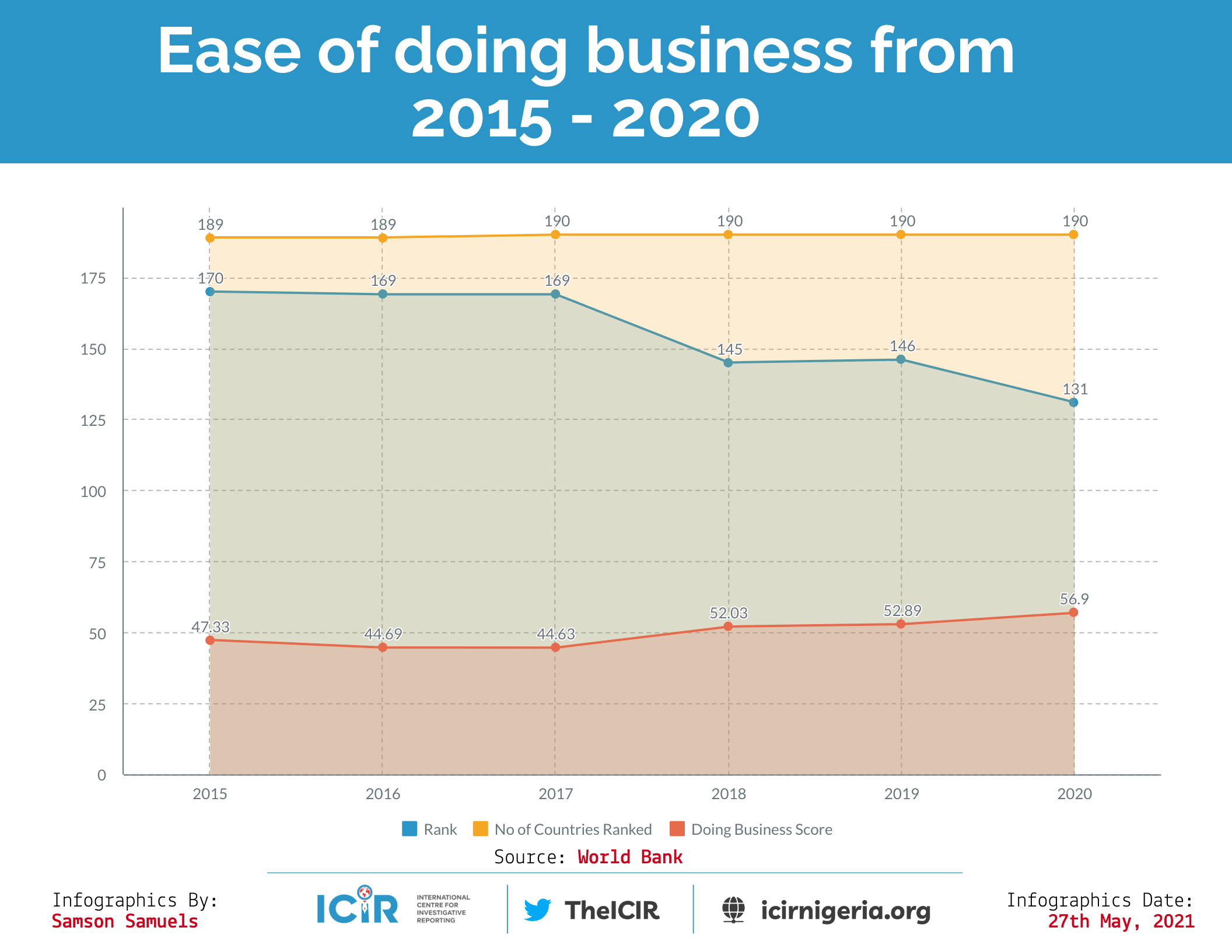 This is still poor as it means investors, especially (foreign) multinationals, will logically have to consider a long list of countries before Nigeria.

The ICIR had reported on an instance of the challenge of doing business in Nigeria and how some government policies had made the business atmosphere somewhat uncomfortable.

The effect of sitting at the lower levels in the World bank’s ease of doing business list is a reduction in the money from capital importation into Nigeria.

Nigeria’s capital importation money indicates the value realised from investments that are made in the country. In 2015, we had $9.64 billion, and after witnessing some high and low points, it rested at $9.68 billion in 2020. 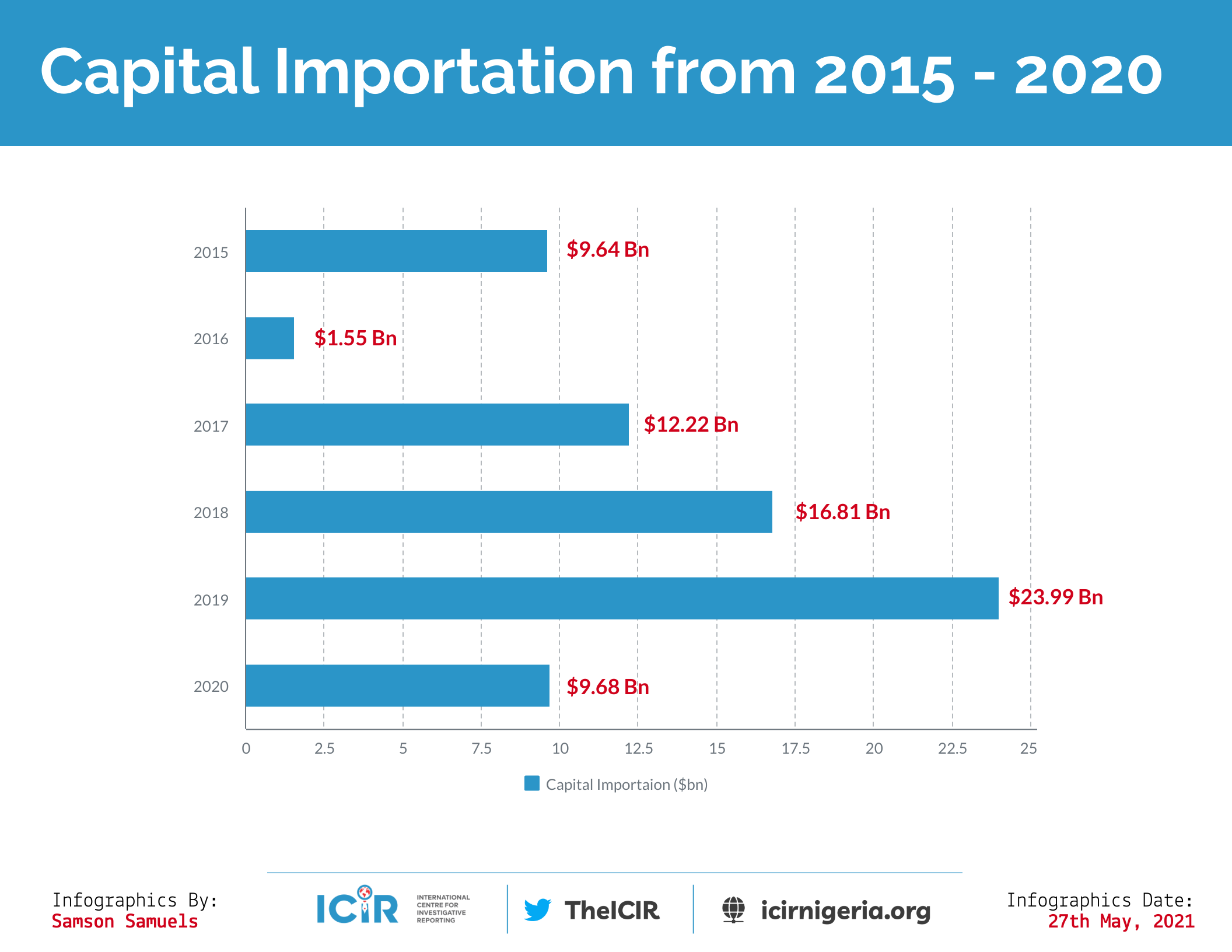 It was at a record low in the first quarter of 2016, with $710.97 million realised. The sum of $23.99 billion realised in 2019 was the highest point recorded in the Buhari administration.

As of 2015, Nigeria ranked 136 among the 180 countries watched by Transparency International (TI), an anti-corruption association.

Corruption Perception Index, a publication of TI, uses a scale of 100 to measure how corrupt countries are annually. Nigeria came behind at number 26 in 2015, tagging Nigeria among the most corrupt countries in the world.

Even though the Buhari administration promised to put up a fight, the index as of 2020 put Nigeria at number 25 on the scale and ranked her 149, a step back from what it was.

Northern elders are playing politics with insecurity in…

From Worst to Worst: Buhari’s six years and the fight…